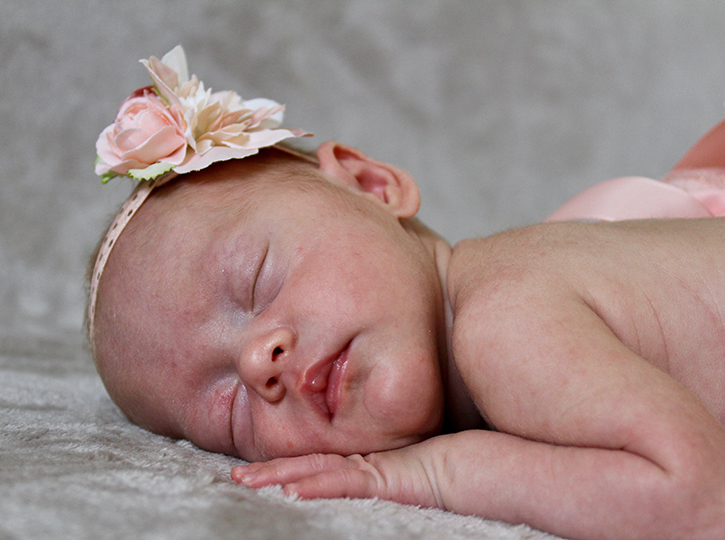 When Jessica and Austin Hammond set out for a peaceful and relaxing babymoon to the Florida Keys, they never expected they would be welcoming their baby girl while on the vacation, in a hurricane ravaged hospital. Jessica didn’t feel well on the second day of the trip and, at 33 weeks pregnant, she knew that something was very wrong. When they sought help at the nearest hospital, they found it still had excessive damage from Hurricane Irma, with a closed emergency room and fences barricading parts of the property.

The hospital was functioning out of a temporary facility, but Jessica and her baby were in trouble and the delivery had to happen immediately. The doctor called to care for her was not an obstetrician, but his skill and that of the team at the Fishermen’s Community Hospital delivered a healthy baby girl. She was tiny at 3 pounds, 12 ounces and seven weeks premature. The baby and Jessica were rushed by medical transport to the Center for Women & Infants at South Miami Hospital.

The Tampa based couple quickly found themselves in an unknown city and unknown hospital with a baby admitted to the NICU. Only having the clothes they packed in the suitcase for their babymoon, Jessica and Austin now had a new reality and NICU battle to face. Like most NICU parents, their journey was a roller coaster with good days and bad days, as their baby girl struggled to breathe on her own and gain weight.

Thanks to the support of their friends, family and church, some of whom drove from Tampa to Miami to visit them, Jessica and Austin stayed strong during their days in the NICU. They were by their baby’s side, engaged in her care, for nearly 24 hours a day until her discharge after 22 days. Jessica says “they are so grateful for the amazing medical staff and their work! God is faithful and, as challenging as the whole experience was, it created an opportunity to see God work a miracle.”

Jessica and Austin aptly named their beautiful baby girl Coral, given her unexpected Florida Keys arrival. She was born on Easter Sunday and no doubt, was meant to make her debut into the world and meet her parents on that exact day.